Albert Einstein is renowned for his theory of relativity and his atomic bomb. One lesser-known piece of work was the photoelectric effect, which led to greater understanding of electricity and light. 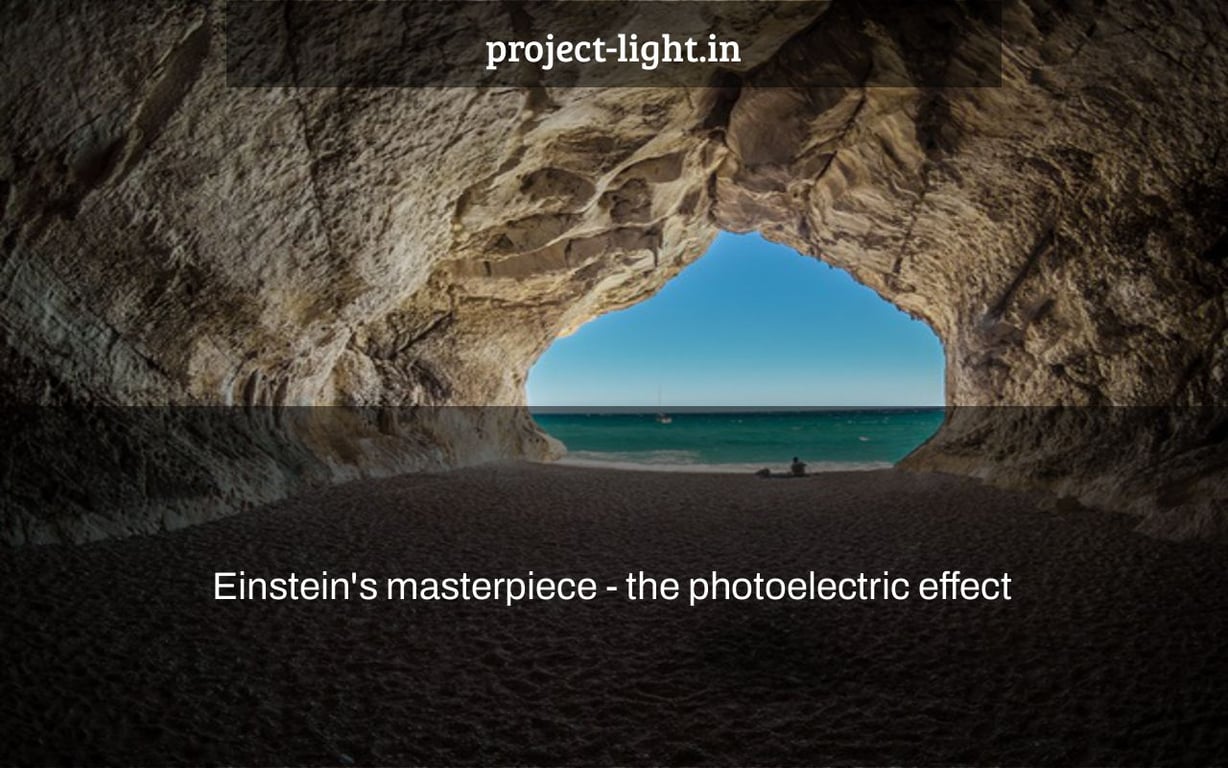 photocell structure The experimental setup of the photoelectric effect is shown in the figure below. The anode A of the photocell is connected to a high potential, and the cathode K is connected to a low potential, there is an accelerating electric field between the anode and the cathode, and the direction of the electric field is from A to K. The voltage between AK is read out by the voltmeter V, and the magnitude of the voltage is given by the potentiometer R. In the figure, G is a sensitive galvanometer. Experiments show that when the cathode is not illuminated by light, there is almost no current in the circuit; when the cathode is illuminated by light, there is an immediate current in the circuit. As long as the light is illuminated, the current will be maintained for as long; when the light stops, the current will disappear. This means that electrons escape from the photocathode when light is illuminated. Under the action of the accelerating electric field, the electrons fly to the anode, thereby forming a photocurrent in the circuit.

1. Photoelectric Effect from the Outside

Under the action of light, electrons absorb photon energy and transition from a bonded state to a free state, causing a change in the resistivity of the material. This phenomenon is called the photoconductive effect. The vast majority of high-resistivity semiconductors have photoconductive effects. Photoelectric devices based on this effect include photoresistors (also called photoconductors), and their commonly used materials are cadmium sulfide (CdS), lead sulfide (PbS), indium antimonide (InSb), amorphous silicon (a-Si: H) ). Under the irradiation of light, electrons in the forbidden band of pure semiconductors are excited by photons with energy greater than or equal to the forbidden bandwidth Eg (eV), and transition from the valence band to the conduction band, becoming free electrons. At the same time, the valence band also forms free holes. As a result, the concentration of electrons in the conduction band and holes in the valence band in pure semiconductors increases, and the resistivity of the semiconductor decreases. As shown in Figure (a) below. Electrons and holes are collectively called carriers. They can form photocurrent under the action of terminal voltage. When the light is stopped, free electrons are captured by atoms that have lost electrons, and the resistance returns to its original value. In the spectral range where electrons in the valence band can transition to the conduction band, the maximum wavelength λ0 (nm) is called the cutoff wavelength, and λ0≈1240/Eg. N-type or P-type doped semiconductors are illuminated by light, as long as the photon energy is greater than the difference between the donor energy level and the bottom conduction band energy level or the difference between the acceptor energy level and the top energy level of the full band Ei(eV), as shown in Figure (b) or Figure (c), light energy is absorbed, and photogenerated electrons or holes that can participate in conduction are excited. The cut-off wavelength of photogenerated carriers generated by the doped semiconductor is λ0≈1240/Ei.

Photoconductive effect mechanism diagram When the photoresistor is connected to the DC voltage Vb and continuously irradiated with light with a certain intensity and wavelength less than λ0, the output DC current i0 is

In the formula, η-the internal photon quantum efficiency (the ratio of the number of photogenerated carriers to the number of emitted photons); μc-the mobility of the majority carriers; τ – the lifetime of the majority carriers; d-the distance between the two electrodes of the photoresistor; p-incident optical power; e – Planck’s constant, which is 6.6261×10-34J•s. With the increase of light energy, although the concentration of photogenerated carriers also increases sharply, the recombination speed between electrons and holes is also accelerated, so the characteristic curve of light energy below the cut-off wavelength and the photocurrent generated by the semiconductor is not the linear relationship.

The photovoltaic effect is the ability of an item (such as a semiconductor) to create an electromotive force in a specific direction when exposed to light. Photocells, photodiodes, and phototransistors are examples of photoelectric devices based on this phenomenon. The photovoltaic effect is separated into three categories: • Photovoltaic action from the side The Dember effect is another name for the lateral photovoltaic effect. The lateral photovoltaic effect occurs when the photosensitive surface of a semiconductor optoelectronic device is lit unevenly, and it is induced by a carrier concentration gradient. Semiconductor position-sensitive devices (PSDs) or inverted photodiodes are examples of optoelectronic devices that function on this principle. The lateral photovoltaic effect works by the illuminating part of the semiconductor absorbing the energy of the irradiated photons to generate electron-hole pairs, resulting in a higher carrier concentration in this part than in the unilluminated part, resulting in a concentration gradient and carrier diffusion. Because electrons have a higher mobility than holes, electrons diffuse to the unlit portion first, causing the lighted part to be positively charged, the unlit part to be negatively charged, and a photoelectromotive force to be formed between the two parts. • Photovoltaic impact of PN junctions When light hits a semiconductor PN junction close to the surface, the energy is absorbed by the junction and adjacent semiconductors. If the photon energy exceeds the forbidden bandwidth, the valence band electrons move to the conduction band and become free electrons, while the valence band becomes free holes. The electrons migrate to the outside of the N area, while the holes go to the outside of the P region, due to the influence of the electric field within the PN junction. As a consequence, the P area is positively charged whereas the N region is negatively charged, resulting in the formation of a photoelectromotive force. The PN junction’s photogenerated current is proportional to the illuminance, and the photovoltaic voltage is proportional to the illuminance logarithm. The lifespan of carriers is proportional to the diffusion length because photogenerated electrons and holes will recombine with semiconductor holes and electrons throughout the diffusion process. The photocurrent can only be produced to create photovoltaics if the thickness of the PN junction from the surface is less than the diffusion length. The frequency response characteristics, photocurrent, and photoelectric potential of optoelectronic devices based on the PN junction photovoltaic effect may be modified in engineering by varying the thickness of the PN junction from the surface. Photovoltaic cells, solar cells, photodiodes, and phototransistors are examples of photoelectric devices based on this phenomenon. The solar cell functions with a photovoltaic effect without an external power source due to the design and manufacturing process. Both the photoconductive and photovoltaic effects are present when the photosensitive tube is operated under reverse bias. The photocurrent they produce is proportional to the light intensity. • Photoelectromagnetic effect (also known as PEM effect): When a semiconductor is irradiated by strong light and a magnetic field is applied in the vertical direction of illumination, a phenomenon known as the photoelectromagnetic effect occurs, in which an electric potential is generated between the two ends of the semiconductor perpendicular to the light and the magnetic field. It’s known as the light diffusion current’s Hall effect. • Effect of Becquerel In liquids, the Becquerel effect is a photovoltaic effect. The Becquerel effect is the occurrence of an electric potential being formed between two identical electrodes submerged in an electrolyte when light is irradiated on one of them. This phenomenon has led to the development of photosensitive cells.

Simple Trick to Download and Use Adobe Illustrator for Free. [Working]